"...for a fine Sunday in Bath empties every house of its inhabitants, and all the world appears on such an occasion to walk about and tell their acquaintance what a charming day it is. ..."
Jane Austen, Northanger Abbey, 1798

A World Heritage Site, Bath lies on the River Avon surrounded by hills. An elegant city constructed from local limestone, Bath owes its prominence to its Sacred Spring which has attracted visitors, pilgrims and seekers of cures for centuries.

Bath boasts the only natural mineral spring in the UK which yields a constant supply of some 1,200, 000 litres of water heated to 46 degrees Celsius. Before the Romans ever arrived in Britain, this wonderful source was already a site of worship but it was the Latin conquerors who engraved Bath's spot on the map. They dedicated a temple here to Sulis and built one of their important social centres, the Roman Baths. Including a hot bath, two pools and a laconium or sauna this huge architectural masterpiece was built between the 1st and 4th centuries. At the departure of the Romans, the Roman Baths were neglected and eventually lost until they were rediscovered in 1755.

Nevertheless, Bath continued to be an important site. The Saxons built a church here and the Normans constructed a magnificent Abbey. Rebuilt in the 15th century, Bath Abbey seemed a project doomed to failure. First, its progenitor, Bishop Oliver King, died before its completion and without his support both funds and enthusiasm were lacking. Finally complete, Bath Abbey enjoyed a mere six years of services before it was stripped and left to rot during the Dissolution of the Monasteries. However, by the 1570's the city of Bath was on the brink of a renaissance due to its revival as spa resort and Bath Abbey was saved, rebuilt and dedicated in 1609.

Bath's reputation for reviving the spirit and wondrous cures continued to grow and by the 18th century had become a most fashionable place 'to take the waters' and hob nose with other prominent members of society. It was at this time that John Wood, Ralph Allen and a famous dandy, Richard Beau Nash ensured that Bath's popularity would be no passing trend. The ambitious three wanted Bath to rank amongst Europe's most beautiful cities. They were inspired to create a city which would assimilate great architecture with the surrounding landscape thereby providing an enlightened and enlightening environment for all visitors who came to Bath. Their legacy is a Palladian styled city where grand public buildings such as the Assembly Rooms and the Pump Rooms blend harmoniously with the grandiose design of Queen Square and the Royal Circus . Also worth visiting is Pulteney Bridge, a Neo-Classical bridge over the River Avon, lined with shops.

A place of culture and history, Bath boasts plenty of museums. First time visitors will enjoy No.1 Royal Crescent, a grand 18th century town house with period furniture and the American Museum in Britain with 15th furnished period rooms and the history of people's lives in the New World. Fashionistas will delight in the Museum of Costume while art-lovers will want to return to the Holburne Museum of Art and the Victorian Gallery. For literary enthusiasts there's the Jane Austen centre detailing Austen's stay in Bath and how the city provided inspiration for Persuasion and Northanger Abbey . Alternatively, there's Sally Lunn's House and Museum, a curiosity piece where you'll able to take a load off and enjoy that Bath speciality, the Sally Lun Bun.

Bath can easily be seen with the help of good guide book and a stroll around the city but there are plenty of tours available such as the hilarious Bizarre Bath Tour and the thrilling Ghost Walks of Bath. If you're pressed for time, the Bath City Sightseeing Tour will take you to all the main attractions complemented by a multi-lingual commentary. After all the sightseeing, Bath's greatest relaxing attractions are the Victorian Boating Station where you can hire a traditional skiff and punt your way down the Avon and the Bath Thermae Spa, a modern complex catering for all your pampering needs.

Bath boasts over 140 historic buildings and terraces, heaps of museums and other sights. Fortunately for the visitor, many of these can be seen in a day trip. However, if you can afford the time, it's worth sticking around to soak up the atmosphere and enjoy the live entertainment provided by the street performers and entertainers. 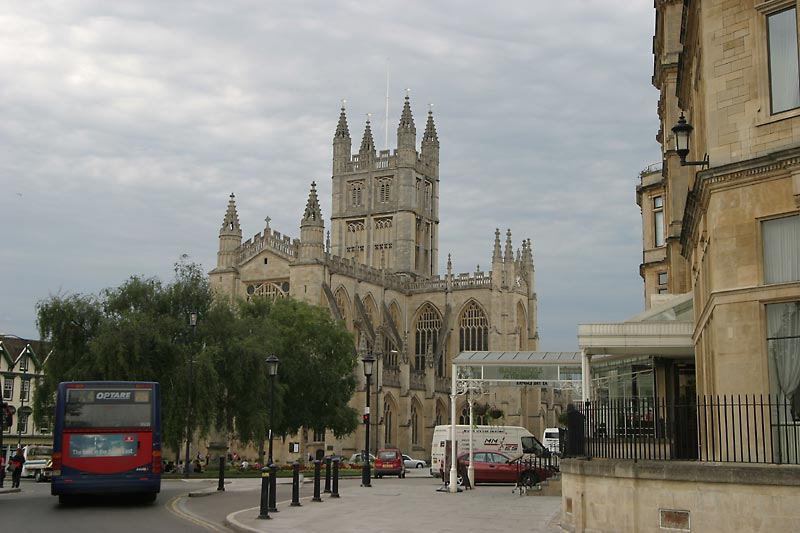