"A fringe of gold on a beggar's mantle"
James II of Scotland, description of East Neuk of Fife

One of the most popular tourists resorts in the area, Elie and Earlsferry are two halves of one coin with the two settlements separated by the sweeping golden sands of an unnamed bay. This picturesque spot is a favourite with Scottish tourists, golfers, windsurfers and sailors. The villages are backed by beautiful rolling countryside and you'll pass through here if you are heading on the Fife Coastal Route.

The two burghs of Elie and Earlsferry were once separate entities but were united in 1929. Earlsferry, dating to the 11th century, is the older of the two. The town is reputed to owe its name to the Earls of Fife. Having land both at Earlsferry and at North Berwick, over the Firth of Forth, the earls lent their support to a ferry which carried pilgrims en route to St Andrews. However, local legend prefers an alternative tale which relates how MacDuff was given a ferry ride to Dunbar while escaping from the evil clutches of Macbeth. At Chapelness, you'll see a ruined building on the headland believed to have been built by MacDuff in thanks. Nowadays, Earlsferry is known for its golf course which was laid in 1895.

Across the bay, Earlsferry's sister, Elie was slower to develop. Following the Reformation, a significant reduction in pilgrims to St Andrews resulted in the end of the ferry over the Forth in 1600. Elie began to get recognition for the safe anchorage offered by its bay and, by 1639, Elie had grown large enough to warrant the building of Elie Parish Church. Sir John Anstruther added its campanile tower in 1726. Unusually, the tower only features 3 clock faces as there were no buildings behind the church when it was constructed.

To the east of Elie, lies Ruby Bay so called after the garnet or red gemstones which still wash up here. From here, you'll be able to see Elie Lighthouse and the Lady's Tower, built as a summer?house for Lady Janet Anstruther in the 18th century. To preserve her modesty, she used to send a bell-ringer around Elie to warn locals to keep away from the beach before she took a dip. Bad as this sounds, in 1771, Lady Anstruther actually had the entire hamlet of Balclevie removed because it obstructed her view from Elie House! Unsurprising, she and her hen-pecked husband were rather unpopular. An Elie fortune-teller got her revenge by putting a curse on her, claiming that no more than six generations of the Anstruthers would live in Elie House. Believe it or not, her prediction came true.

As well as tennis courts and a 9 hole golf course, Elie also boasts the "Ship Inn?, a pub housed in an 18th century building renowned for the cricket matches it organises on the beach.

Ever since the Victorian craze for 'watering places', Elie and Earlsferry have enjoyed their status as a popular seaside resort. Their award-winning beach is excellent place to relax while watersports enthusiasts can head to Elie Harbour where you can have a go canoeing, sailing, windsurfing or waterskiing. 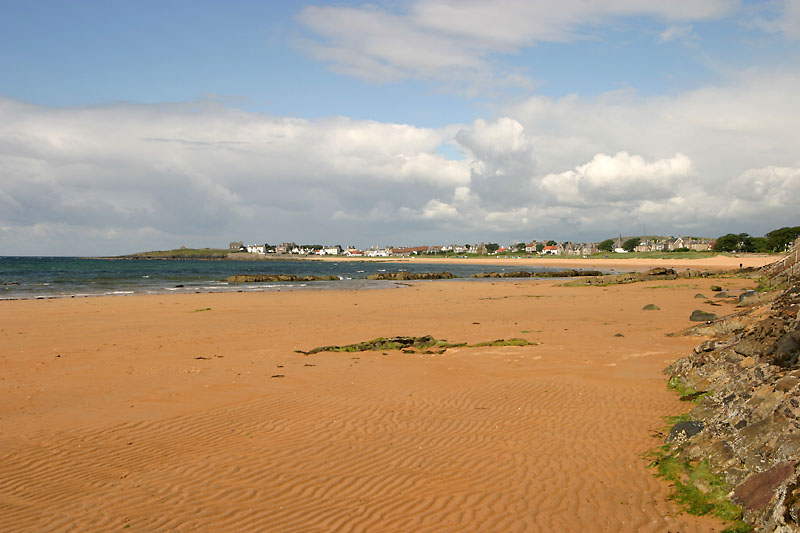 The ancient capital of Scotland and final resting of King Robert the Bruce, Dunfermline boasts a square mile of historic attractions including Dunferm ....

Situated in an area commonly known as Speyside, Huntly lies close to the Whisky Trail. Although there are no distilleries in the town itself, Huntly ....