Lying in the southeast of London, Greenwich provides a wonderful diversity of attractions to wile away your time on a sunny afternoon. Increasingly, more and more locals and tourists make their way here to pick up a bargain at the markets. However, the real attraction lies along the river with the Baroque, former Royal Naval College and adjacent famous tea clipper, the Cutty Sark. In the south of Greenwich lie two focal tourist attractions, the National Maritime Museum and the Royal Observatory.

Getting there If you want to make a day of it, the most enjoyable way to get here is to jump on a ferry either at Westminster or London Bridge and make your way down along the Thames in much the same way as royalty of former times enjoyed. Alternatively, you can take a DLR (Docklands Light Rail) from Bank Station to Greenwich. If it's good photos you're after, get off the DLR train at Island Gardens and you'll be able to see the whole Royal College from the opposite side of the bank. Be warned - claustrophobics will want to steer well clear of the Greenwich Foot Tunnel which will take you from Island Gardens, under the Thames to the Old Royal Naval College.

Cutty Sark The Cutty Sark has forever come to rest in a dry dock just outside the Greenwich Foot Tunnel. The famous tea clipper made a name for herself at a time when the world's merchants would race to and from China in a bid to get the fastest and largest part of the market possible. At the time, tea was supremely fashionable and millions of tea leaves were imported to Britain alone. These were the last great days of unpowered, sailing cargo ships soon due to be ousted by sturdier and faster steamers. The Cutty Sark never actually won the tea race but made a name for herself some years later with a record return journey to Australia in just 72 days with her very profitable wool cargo. Today the Cutty Sark is a National Heritage Museum and your entrance fee will pay for her continued restoral. it's an enjoyable place to explore with information directed at both adults and kids. Inside the hold, placards detail the history of the ship while descending to the bottom of the ship will take you to an interesting collection of former naval figureheads and a video with historical footage of tea clippers. However, the real treat is the main deck which will give you an idea of life aboard the sailing ship with the Captain's dining and working cabin, First and Second Mates cabins, kitchen and the apprentices'quarters.

The Visitor's Centre The visitor's center lies to the right of the Cutty Sark. it's a good idea to head here first for a free map of the grounds and their attractions. As well as the usual tourist memorabilia, there are also some interesting displays and photos on the history of the grounds and the people who created them.

University of Greenwich or the Old Royal Naval College Lying on the river bank, these old Baroque buildings were designed by Wren as a royal palace. They're an undeniably enjoyable place to stroll around as you listen to wisps of classical music wafting down to you from the students at Trinity College of Music. The symmetrical ensemble of buildings is marked by its lack of a center piece. Indeed, Wren had originally included one in his first designs but the Queen objected to it on the grounds that it would block the view. When finally completed, the grounds were eventually transformed into a hospital for disabled seamen who were limited to rations of four pints of ale a day. Changing warfare led to the decline of the once overflowing seaman's hospital and the grounds were converted into the Royal Naval College between 1873 and 1998. Today, the buildings continue to serve an educational purpose and now house the University of Greenwich and the Trinity College of Music. However, it's below Wren's twin domes that you'll the most interesting cultural attraction. The Chapel lies in the east wing. Originally designed by Wren, two ornate, elongated balconies line the sides of the church. The central art panel is a depiction of St. Paul's Shipwreck in Malta and his reception by the friendly natives. The interior with its decoratively, detailed ceiling was redesigned by James Stuart in 1799, after the original was destroyed by a fire caused by some overenthusiastic celebrations in the adjacent building. From the Chapel take the underground Chalk Walk to the Painted Hall. It was here that Lord Nelson's body was laid out after it made the journey from his last triumphant (but fatal) battle, the Battle of Trafalgar. The Hall is adorned by paintings which pay homage to victorious naval warfare and royalty with the whole being dominated by James Thornhill's ceiling painting. 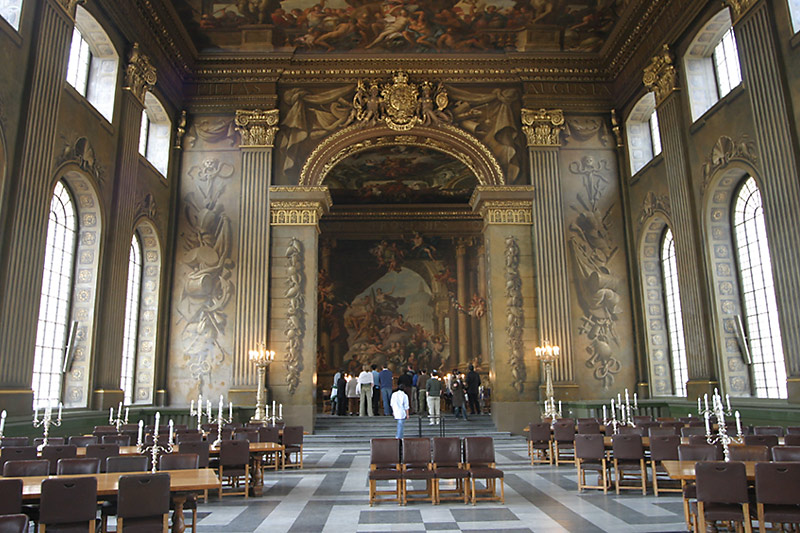