"I had stumbled on the solution...on the moors between Pitlochry and Strathardle, conceived in Highland rain, in the blend of the smell of heather and bog-plants,..."
The Art of Writing by Robert Louis Stevenson (1850-1894)

Pitlochry is loved by some for the same reasons it is hated by others " it is busy and very touristy. Placed as it is at the geographical heart of Scotland, Pitlochry provides an ideal base for touring both Scotland and the attractions in the area.

A young town by Scottish standards, Pitlochry was only settled following the construction of a military road by General Wade in the early 18th century. A century later, the Victorian impulse to travel, simplified by new railways, settled Pitlochry's fate as a tourist hot spot. They left their mark in the Victorian architecture and are now remembered in the Atholl Palace Museum.

Whether you love it or hate there is no denying that Pitlochry is beautifully situated. Surrounded by beautiful countryside and backed by Ben Y Vrackie, Pitlochry lies on the River Tummel which was dammed in 1950. This created Loch Faskally, a beautiful spot for strolling (boats can be hired from the Pitlochry Boating Station). More unusual for most than the loch is the Scottish & Southern Energy Visitor Centre. The greatest attraction in Pitlochry, it gives you the opportunity to watch salmon jumping the Fish Ladder. Extending to 900 feet, Pitlochry's Fish Ladder is passed by some 5,000 salmon a year as they swim upstream during the spawning season between April and October. At the centre, you can also find out all you'll probably ever want to know about hydro electric power.

Another popular attraction in Pitlochry on the River Tummel is the Pitlochry Festival Theatre. Established in 1951, the first theatre here put on its productions in a tent. A purpose-built venue was eventually constructed in 1981 and it is now one of the most popular venues in Scotland. Nearby is Explorers Scottish Plant Hunter's Garden which opened in 2003. Celebrating the Scottish explorers and botanists who roamed the world in quest for new species, the garden trails take you through an attractive, modern landscape with sculptures, an amphitheatre and the picturesque David Douglas Pavilion formed from Douglas fir.

Whisky lovers have two distilleries to choose from. The Blair Atholl Distillery in the centre of Pitlochry produces a malt used in the Bell's blend. However, the Edradour Distillery just outside Pitlochry is hard to beat. It uses age old traditions in the production process and is not only the smallest in Scotland but is also the only one that can boast handmade whisky. For golfers there's the Pitlochry Golf Course which has been described as "the Switzerland of Scotland" with its beautiful backdrop of the Grampians. Pitlochry is also a great spot for fishing and anglers can head to the Pitlochry Angling Club, Mitchells of Pitlochry or the Findygate Estate Salmon Fishing. An attraction for the kids is the Pitlochry Children's Amusement Park. There are also a range of short and long walks in the area. For more information, pick up the "Pitlochry Walks" booklet from the Pitlochry Tourist Information Centre on the main road. 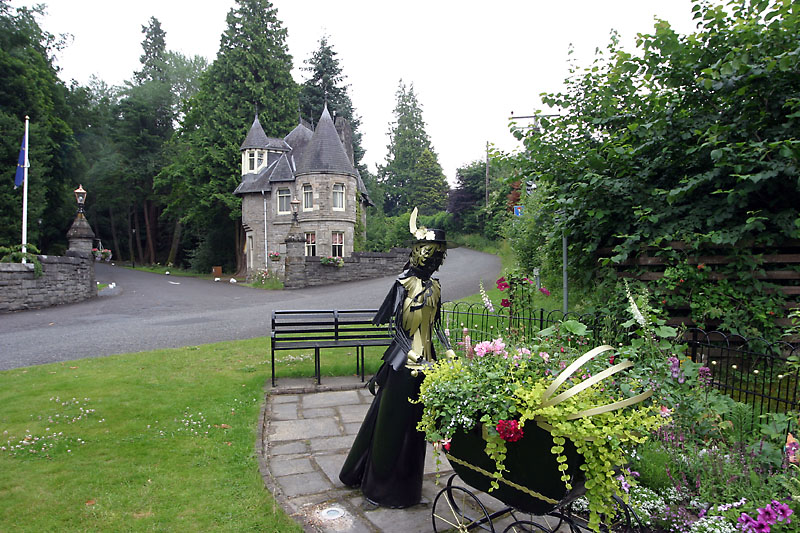