One of the most famous castles in Scotland, Blair Castle is the ancestral home of the Dukes of Atholl. Its beautiful grounds offer camping, woodland walks, gardens and riding while the interior is an Aladdin's cave of family treasures and antiques with more rooms open to the public than any other private house in Scotland.

Reached via a wooded driveway, Blair Castle, with its whitewashed walls and turrets looks like something straight out of a fairy tale. A live piper plays the bagpipes outside the front door and the whole impression is only slightly marred by the plenitude of other tourists taking photos.

Blair Castle dates back to 1269 when Cumming's Tower was erected by a neighbour while the Earl of Atholl was fighting in the crusades. Although enraged he nevertheless incorporated the offending structure into Blair Castle building a Great Hall and vaulted chambers leading off it. In Cumming's Tower, you'll now be able to see the Tapestry Room which displays the beautiful Mortlake Tapestries, once property of Charles I.

Attacked and captured by Cromwell in 1653, Blair Castle has witnessed some of the key turning points in Scotland's history as well as some of its most famous figures. Besieged by Cromwell and again during the Jacobite Rebellions, Blair Castle has also seen visitors such as Edward III, James V, Mary Queen of Scots as well as Queen Victoria. She was delighted with Blair Castle and the beauty of the surrounding area on her six week visit. In thanks, the Duke of Atholl became sole holder of the right to raise a private army in Britain. The Atholl Highlanders, who now occupy a ceremonial role, have a small museum dedicated to them in Blair Castle with displays of uniforms, weapons and musical instruments.

Once an important stronghold guarding entry to the Highlands, Blair Castle was converted into a Georgian mansion in the 18th century. However, a change of fashion in the 19th century saw it restored to its original appearance by David Bryce who also added the magnificent ballroom. On your tour of Blair Castle, you'll see over 30 rooms with splendid interiors including collections of portraits, pictures, porcelain, antique furniture, weapons used in the Battle of Culloden, Jacobite relics and many other artefacts. The tour of Blair Castle will give you an insight into both the Dukes of Atholl as well as the many servants and workers who have lived here.

The Blair Castle grounds consist of 2,500 acres with woods, gardens, trails and follies all waiting to be explored. Hercules Garden, presided over by a life-sized statue of the god was built in such a way that visitor walking to the statue would be surprised by the garden. You may also want to pop into St. Bride's Kirk where you'll see the grave of "Bonnie Dundee" or John Graham, 1st Viscount of Dundee who lost his life nearby in the Battle of Killiecrankie. 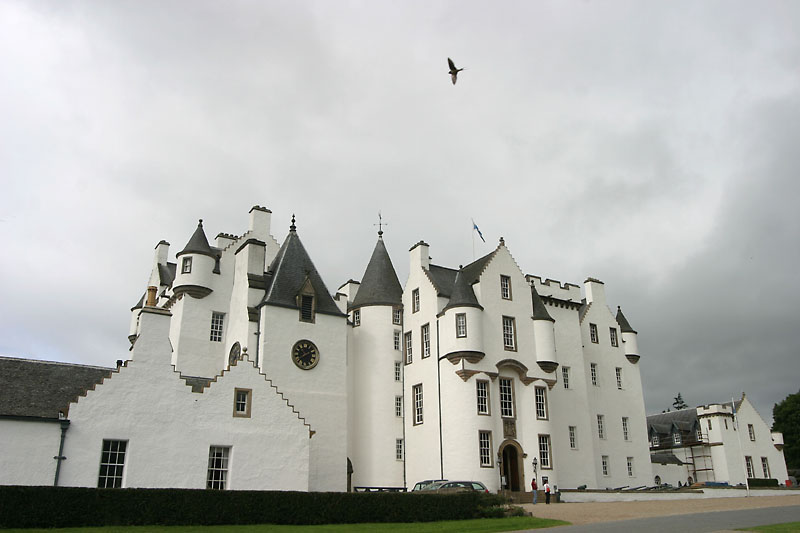