Situated on the Angus coastline 8 miles from Arbroath and 11miles from Dundee, Carnoustie is one of Scotland's favourite destinations for golfing holidays. Golfers can take their pick of the four golf courses here while other tourists can indulge their taste for windsurfing, sailing, fishing, horse-riding or simply relaxing on the golden sands of Carnoustie Bay.

The first record of golf in Carnoustie dates to 1560 and it is also the first written record of a commoner, rather than a royal, playing golf. The parish records record that the sheriff of Angus, Sir Robert Maule played golf at Barry Links near Carnoustie. Nevertheless, it was not until 1842 that Carnoustie could claim to be home to a 10 hole golf course. Golf swiftly put down roots in Carnoustie and in 1873 the first golf club for women in the world, Carnoustie Lady's Golf Club was established. Just ten years later, Simpsons golf shop opened its doors to the public and it is now the second oldest establishment of its kind in all the UK. By the 1930's, Carnoustie was known for its professional golfers many of whom made names for themselves in America. Carnoustie now has three golf courses; Carnoustie Buddon Links, Carnoustie Burnside Golf Course and Panmure Golf Course. Keen golfers may also try other courses within easy reach from Carnoustie at Montifieth and Arbroath. Carnoustie hosted the Golf Open Championship in 1931, 1964 and 1991 when it was won by a Scots, Paul Lawrie. Carnoustie is also hosting the event from the 19th to the 22nd July, 2007.

Carnoustie has attracted tourists ever since the Victorians came here in quest of cures from that wholesome sea air. Carnoustie dubbed itself the Brighton of the North and was one of the most popular seaside resorts until WWII. Carnoustie Bay has not lost any of its beauty and offers fine views from its golden sands over the Tay estuary to Fife.

Visitors to Carnoustie may also visit the sights and sounds of a bygone era at Barry Mill. This working corn mill which dates to the 19th century, a relic of an industry of which existed here from at least the 16th century. Passing cherry trees as you enter, you'll see the turning water wheel and learn more about the historical role Barry Mill (NTS) played in the history of Carnoustie, find out more about that ancient tradition of grinding corn or possibly take a stroll by the river. Alternatively, just three miles out of Carnoustie are the Carlungie and Ardestie Souterrains, underground caverns which were once used by farmers to store food. In the last week of June, Carnoustie comes to life with entertainment during Carnoustie Gala Week. 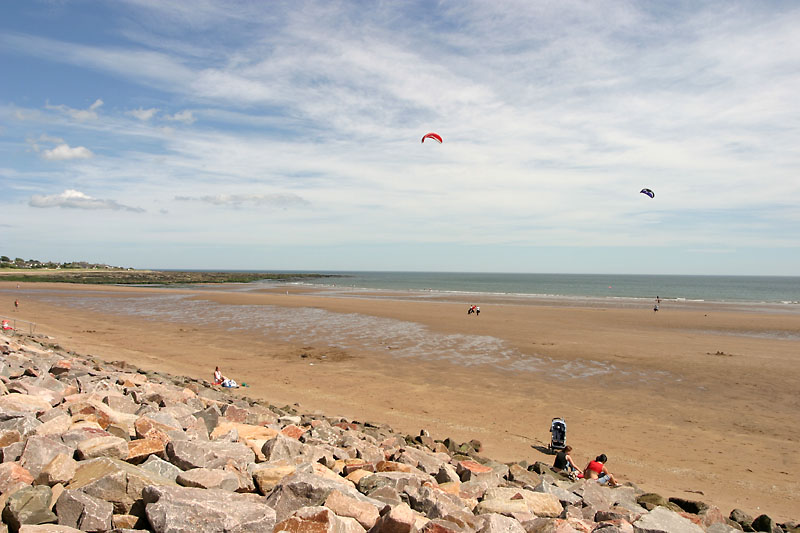