"A mile eastward of Gardenstown is the little fishing village of Crovie, worth a morning's ramble if only for the sake of the scenery which still maintains its character and savage grandeur."
Reverend John Pratt

Crovie's past is full of hardship. This wee fishing village which occupies a preposterously narrow strip of land was established by families who came here from the Highlands in the 18th century. Following the Jacobite uprisings of 1715 and 1745, families and whole villages were uprooted by their landlords in an attempt to douse the fiery spirit of the rebellious northern Scots. Villages such as Crovie were the result.

On seeing the village of Crovie from the hill above for the first time, visitors are inevitably dumbstruck. Squeezed as it is between the cliffs and the sea, Crovie occupies such a narrow stretch of land that there is only enough room leftover for a footpath which runs along the seawall to give access to the village's houses. As residents have to make do with a small car park, all visitors to Crovie are requested to park their cars slightly up the hill.

Life in Crovie was unquestionably hard in the days before modern conveniences. Even so, the residents of Crovie still use wheelbarrows or trolleys to manoeuvre large items from their cars to their homes. Its interesting architecture has been conserved thanks this inaccessibility and Crovie is now considered to be better preserved than any other fishing village of comparative size in Europe. The simple stone, slate and pentile-clad houses which you'll see in Crovie on your visit are typical constructions erected by fishing communities along the Moray Firth coast in the early 18th century. Crovie's original buildings are easily recognisable. Their gable end faces the sea in a similar manner to the way a boat rides a storm " the area of least resistance faces the worst force of the gales which weather this coastline in the winter months.

Crovie was originally destined to be a fishing village and after her residents were removed from their Highland homes and livelihoods they had little choice but to eke a living from the boats they hired from their landlords. Totally justified in their resentment at the injustice of their situation, Crovie's residents were spurred into building their own vessels. By the end of the 18th century, the standard of living in Crovie had finally improved and her residents owned some 50 boats, a sizeable number when compared to the mere 10 they had shared between them in the mid-18th century.

Fishing in Crovie was an industry that once involved the entire community. Women and children gathered shellfish from the rocks and then baited the fishermen's hooks before they sailed in quest of haddock, whiting and mackerel. However, by the turn of the 20th century, Crovie's fleet could no longer compete with the larger vessels in the industry and fishermen left Crovie for the larger ports of Fraserburgh and Macduff.

The most dramatic event ever to occur in Crovie was the great storm in 1953. On the night of the 30th January a gale force wind swept across the British Isles leaving much damage and loss of life in its wake. Coastline areas were worst to suffer and Crovie was no exception. Not only did the very landscape change as entire structures were swept into the sea, but many of Crovie's residents simply packed up and left. Crovie had started a new life as a holiday resort. 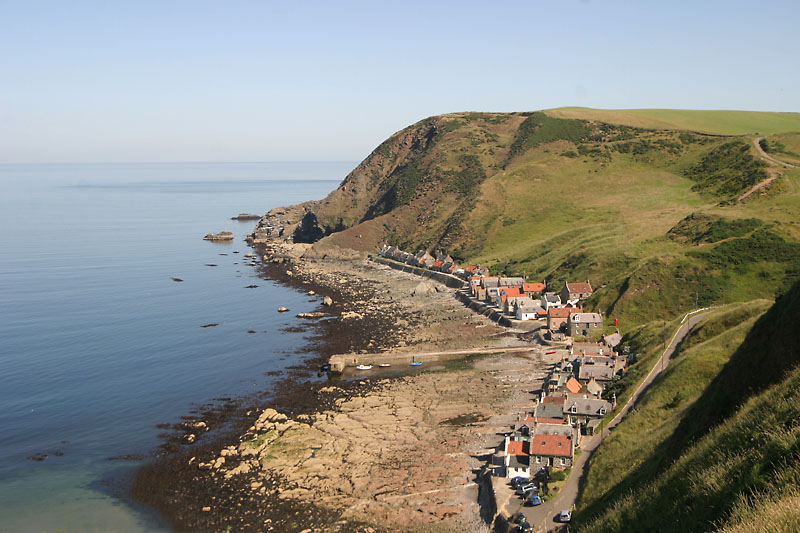