Once a sleepy village, Stonehaven developed into an attractive town after the development of Stonehaven Harbour. The town lies on Aberdeenshire's Coastal Trail and is just 16 miles south of the city of Aberdeen. As a tourist destination, Stonehaven is popular for those interested in both culture and the sea.

Stonehaven really began to develop in the 17th century when periodical improvements on Stonehaven Harbour were begun. Although Stonehaven had enjoyed the use of its natural anchorage for many years, the development of Stonehaven Harbour was gradually improved to provide a sheltered harbour with an Inner, Outer and Middle Basin. Stonehaven was originally known as Staynehyve after an obtrusive rock which protruded on the south side of Stonehaven Harbour. This was removed on the advice of Robert Stevenson, (the great lighthouse engineer and grandfather of Robert Louis Stevenson) an improvement which subsequently enabled the construction of the South Pier in 1826.

Like many other harbours and ports in the North East of Scotland, Stonehaven enjoyed the profits brought in with the herring fishing boom in the 19th century. By the 1890's there were 200 fishing boats based in Stonehaven while the industry provided work for much of the community as herring girls, coopers and carters were involved in gutting, salting, packing and transporting the catch. Improvements in ship-building and a decline in herring and white fish stocks resulted in the decline of Stonehaven's importance as port in the 20th century. Nevertheless, a few boats still do land their catches of scallops and whitefish at Stonehaven but the majority of Stonehaven Harbour has been given over to pleasure boats and yachts. In the summer, visitors can watch the regattas put on by the Aberdeen and Stonehaven Yacht Club. Alternatively, get out on the water itself and take a sea angling cruise or head south from Stonehaven on a pleasure cruise to watch the thousands of birds which nest at Fowlsheugh.

Near Stonehaven Harbour lie the 18th century Stonehaven Mercat Cross and the Steeple, a historic spot which saw the proclamation of James VII as king in 1715 after his landing at Stonehaven Harbour. Situated to the north of Stonehaven harbour is Stonehaven's oldest building, the Tolbooth which dates to the late 16th century. First a storehouse for 5th Earl Marischal, George Keith of Dunnotar Castle, the Tolbooth also served as the Stonehaven court and prison from 1600 to 1767. In 1963 it was converted into the Tolbooth Museum and now details the history of Stonehaven, her people and fishing fleet.

The best time to visit Stonehaven is at Hogmanay when you'll see the traditional Fireball Festival in the "Auld Toon" area of Stonehaven. This ancient pagan ritual sees some 60 men swinging fireballs through the air. This was once thought to attract the sun to ensure its return after the long, dark winter. On the first Saturday in June, Stonehaven comes to life with the Feein' Market with live entertainment and stalls and music to entertain the entire family. 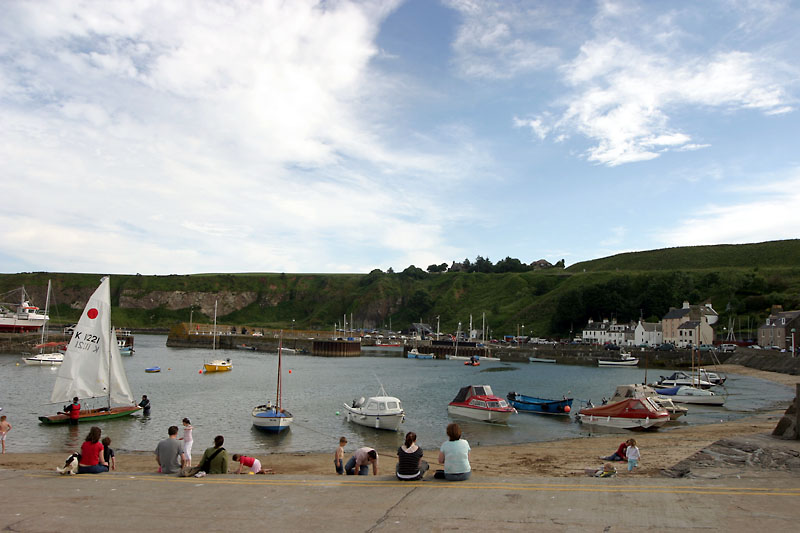