"We went forwards the same day to Fores, (Forres) the town to which Macbeth was travelling, when he met the weird sisters in his way. This to an Englishman is classic ground"
Samuel Johnson, A Journey to the Western Isles of Scotland

An ancient Royal Burgh and Market Town, Forres is believed to be one of the oldest towns in Scotland for Forres is probably the "Varris" drawn by Ptolemy on a map over 2000 years ago. Forres lies twelve miles west of Elgin between the wooded slopes of Cluny and Sanquharls and the River Findhorn. Steeped in local history and tradition, Forres is also well known for its horticulture with almost 30 major awards to its name.

The earliest remains at Forres are Pictish. The 20ft Sueno's Stone dates from the 9th or 10th century and is the largest Pictish standing stone is Scotland. One side features a cross while the other has 4 panels depicting the scenes of a battle. The history behind the scenes is a mystery but one panel at least is thought to depict a battle fought at Forres in 966 AD when the Dubh, the Scottish king was killed.

Forres was once one of the most important places in Scotland. Indeed Shakespeare refers to Forres in Macbeth as the site of Duncan's castle. There was certainly a Royal castle at Forres from at least 900AD and by the 12th century, Forres had also earned its Royal Charter. Forres Castle has long since disappeared but the spot where it lay is now marked by the Thomson monument.

Although Forres is still laid out on its original medieval ground plan, the town is dotted with parks such as Grant Park with its Sunken Garden. Here you'll also the Nelson Tower built by the Forres Trafalgar Club to commemorate Nelson and his death in the battle of Trafalgar in 1805. If you climb the 96 steps to the top, you'll be rewarded with spectacular views over Forres and the Moray Firth.

Standing proudly in the busy High Street of Forres, you will see the Forres Tolbooth which dates from the 19th century. High Street is also home to the Forres Mercat Cross, a gothic piece of architecture designed by Thomas MacKenzie from Elgin. This 19th century piece was erected around the original and the old Mercat Cross of Forres is now at its heart. Also of note is the Witches' Stone. This historic stone in Forres is thought to date from Pictish times and now marks the spot where one of three witches who placed in barrels and rolled down Cluny Hill came to rest. You'll find more history at the Falconer Museum. It was built on funds left by Alex and Hugh Falconer from Forres. The museum now details the history of Forres, its people and that of the area surrounding Forres. It also contains a tribute to Roy Williamson who had a home in Forres and wrote the words to the unofficial Scottish National Anthem, "Flower of Scotland".

Forres is also a gateway town for the Whisky Trail. There are two distilleries to be found in Forres itself. The oldest of these is Dardhu Du, a Victorian distillery now longer in operation. Benromach Distillery has reopened and is just a short mile or so away from Forres. Fishing can be found at the River Findhorn " the Forres Angling Association fishing permits are available from the Forres Tackle Shop on High Street. Golfers can play 18 holes at the Forres Golf Club. 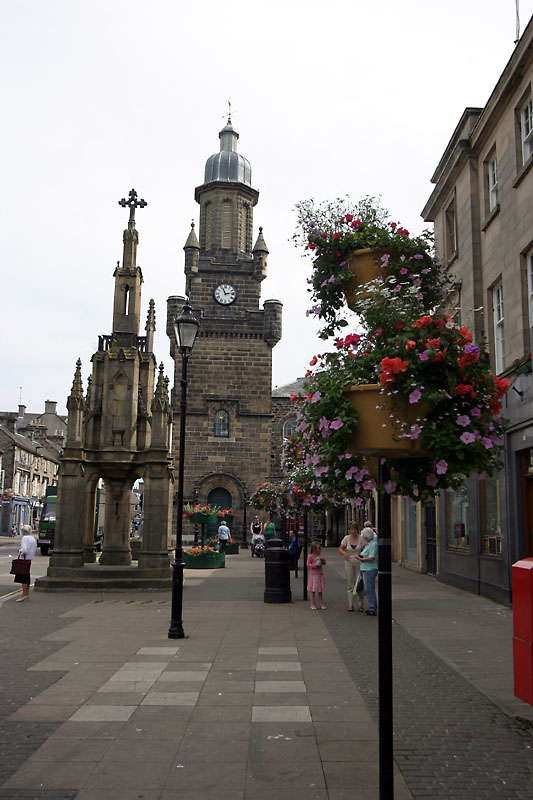 The ancient capital of Monteith, Doune is now famous for Doune Castle. One of the finest surviving medieval castles in Scotland, Doune Castle made a ....