Eight miles north of Ruthin, Denbigh is an ancient market town and fort. Called 'Dinbych' in Welsh, in popular mythology the town's name 'Denbigh' is owed to the heroic efforts of a medieval knight called John Salusbury. He is said to have relieved Denbigh of the terror of a nearby resident dragon. After a victorious battle, his triumphant return to Denbigh was heralded by 'Dim Dych' or 'No More Dragon'. Somewhat more prosaically, Denbigh is translated as 'small fortress' and in all likelihood the name refers to the stronghold built here by Llywelyn the Last.

The ruins which now dominate the hilltop date from the 13th century. The remains are those of Denbigh Castle built when Denbigh was granted to Henry de Lacy by Edward I shortly after the conquest of Wales in 1282. Denbigh Castle was built on a grandiose scale, so grand in fact that the castle was probably never completed at all. One of the most significant remaining features of Denbigh Castle is the gatehouse with its three octagonal towers. The gatehouse towers enclose what was once a vaulted hall " the whole comprised a state-of-the art defensive structure of the time which was designed by Master James of St George (Edward the I's main architect in the north of Wales).

Following the arrival of the English, Denbigh became a bastide town or one which depended on its castle for its defence. Surrounded by town walls, Welsh were not permitted to reside within its boundaries and only gained entrance during the day to trade. Although the walled town of Denbigh was completed by 1311, it continued to bear the brunt of sporadic attacks by the native Welsh. In 1402, Denbigh suffered a siege at the hands of Owain Glyndwr but the real damage was done during the Wars of the Roses when Denbigh was burnt to the ground. The new Denbigh moved down the hilltop and grew up around the market place. This is where you will now find the majority of Denbigh's conservation buildings, a pleasing assortment of colonnaded medieval buildings which lend Denbigh an Old World charm. The main thoroughfare is High Street where you will find the market place as well as the 16th century County Hall. This building contains the Denbigh Tourist Office and a little museum dedicated to the history of Denbigh which also pays homage to some of its former citizens.

Denbigh's most favoured son is Henry Morton Stanley who was born at Denbigh in 1841 and went on to achieve fame as an explorer of Africa and for a historic meeting which began with the words, 'Dr Livingstone, I presume?'. Other famous sons include Twn o'r Nant otherwise known as Tom of Dingle. Dubbed by George Borrow as 'the Welsh Shakespeare', Twm o'r Nant was a bard, satirist and playwright. His grave lies in the cemetery of St. Marcella's church on Whitchurch Road. 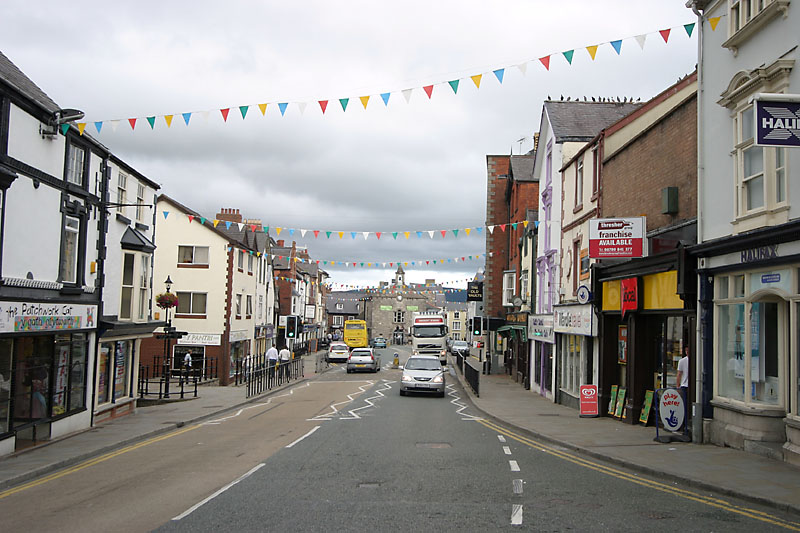