Llandudno is the most genteel of all the North Wales seaside resorts. Its elegance is owed to its Victorian architecture which backs a long, crescent-shaped beach and seafront promenade. Overlooked by the twin peaks of Little and Great Orme, Llandudno is a superb destination for all ages with seaside, historical and natural attractions to suit a range of interests.

Purpose-built as a tourist destination to cater for the Victorian market in the 1850's, Llandudno has retained its Victorian architecture and a genteel feel that makes it one of the most popular seaside destinations in Wales.

Llandudno Promenade which fronts Llandudno Bay is inevitably the first port of call to most visitors to Llandudno. An elegant and wide promenade, it makes for lovely strolling and is wonderfully free of the tacky attractions that dominate so many other seaside destinations. Nevertheless, candy floss, amusement rides and other quintessential seaside attractions such as the Punch and Judy show can all be found on Llandudno Pier (1877). From here you'll get great panoramic views of Llandudno Bay and Llandudno's greatest attraction, the Great Orme.

A dramatic rocky outcrop overlooking Llandudno, Great Orme is somewhat poorly promoted and yet the spot is not to be missed on any visit to Llandudno. The summit of this ancient mountain can be reached on foot but the less mobile can take their pick between the scenic toll roads of Marine Drive and Old Road or aboard the Great Orme Tramway or Llandudno Cable Car.

The simplest reason to visit Great Orme is for the outstanding scenic views which look over Llandudno, stretch to the shores of Anglesey and to the peaks of Snowdonia. Llandudno originally began as a settlement on Great Orme and a medieval church still stands here on the site of the cell of its 6th century founder, St Tudno. However, more visitors are attracted to the Great Orme Mines. The oldest Bronze Age copper mine open to the public in the world, it has 4 miles of tunnels to explore and was probably one of the most important sources of metal during its heyday. The headland of Great Orme is a protected site with a visitor centre where you can find out more about its Neolithic sites, flora and birds. The more adventurous can also head to the Llandudno Ski and Snowboard Centre.

Back in Llandudno, there's plenty to keep you occupied. The Oriel Mostyn Gallery is the leading centre for art while exhibitions at Llandudno Museum depict; Llandudno's development, work in the Llandudno Copper Mines, cooking in a traditional Welsh kitchen and Llandudno in wartime. There's more about Llandudno and Britain during war on New Street at the WWII Home Front Experience.

For kids there's also the Alice in Wonderland Centre which profits on the tenuous association which Llandudno has with the children's classic. The real Alice, Alice Liddell, visited Llandudno in 1861 and her family stayed in a house that is now the St Tudno Hotel. Other attractions and things to do in Llandudno include the Llandudno Camera Obscura, Bodafon Farm Park, Llandudno Boat and Fishing Trips, the Llandudno Town Trail and Turbulence an adventure-sports and kite-surfing specialist based in Llandudno.

The best time to visit Llandudno is during the town's biggest event, the Victorian Extravaganza held during the bank-holiday weekend in May. In September, Llandudno celebrates a more unusual festival of adventure sports known as Kitejam. 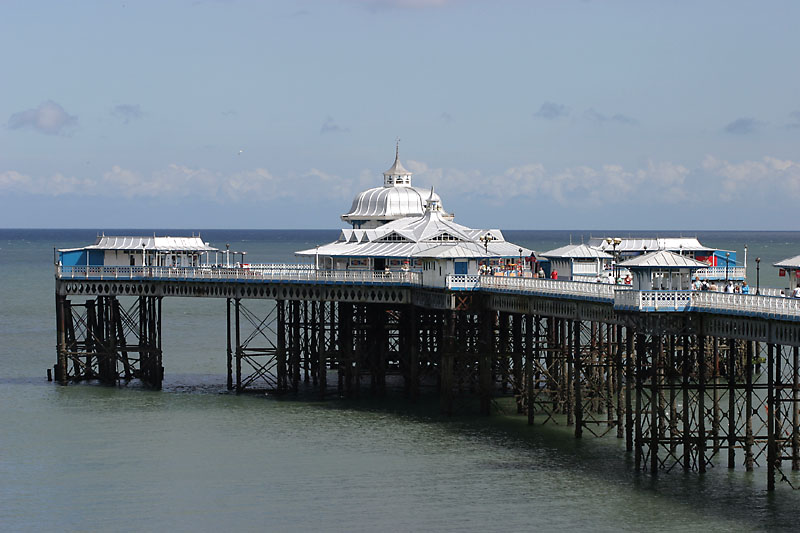