"If there is not any piece of land prettier than this, henceforth my name shall be upon it, that is Dolydd Elen (Dolwyddelan)"
Excerpt from Gweithiau Gethin (1884)

Dolwyddelan stands at a natural and historical crossroads, in the shadow of the mountains of Siabod and Rowen. The village straddles the trout and salmon-rich Afon Lledr, a river which wends its way through meadows and turbulent gorges northwards to join the Afon Conwy at Llyn yr afanc. Dolwyddelan Castle, just outside the village centre, controls a commanding and awesome panorama and the views from the battlements are breathtaking.

Dolwyddelan probably got is name from "Del" meaning meadow and "Gwyddelan" (the little Irishman) who was one of the Celtic missionaries from Ireland who helped to restore Christianity in Britain in the 5th century. According to legend he set up his preaching cross near the hill, Bryn y Bedd, some 300 yards from the present church. The handbell now hanging there is thought to be that which Gwyddelan brought with him from Ireland.

The history of quarrying in the Dolwyddelan area is still visible from the slate rubble and industrial architecture in the fills around the village. The quarries were mostly small and the slate was a poor, intensely black product. Some development was achieved, notably at Prince Llywelyn Quarry, but the area never managed the success of the two huge sites near Blaenau Ffestiniog. However, the old tramway line with a beautiful embankment and bridge over the Afon Lledr linking the small Chwarel y Fedw quarry with the Prince Llywelyn mills is worth a visit.

Dolwyddelan is an ideal starting point for exploring this part of Snowdonia with many picturesque walks from level strolls along the river bank to more energetic hikes into the surrounding hills and on to the summit of Moel Siabod (872m). North of Dolwyddelan, walkers can also head to Moel Penamnen and Y Ro Wen. As Dolwyddelan is also situated on the Cistercian Way, walkers are well-situated and can follow this ancient route taking in nearby historic sights such as Cymmer Abbey and Betws y Coed to the north of Dolwyddelan or Tomen Y Mur, to the south. A popular spot for experienced climbers is Carreg Alltrem situated about a mile south of Dolwyddelan. 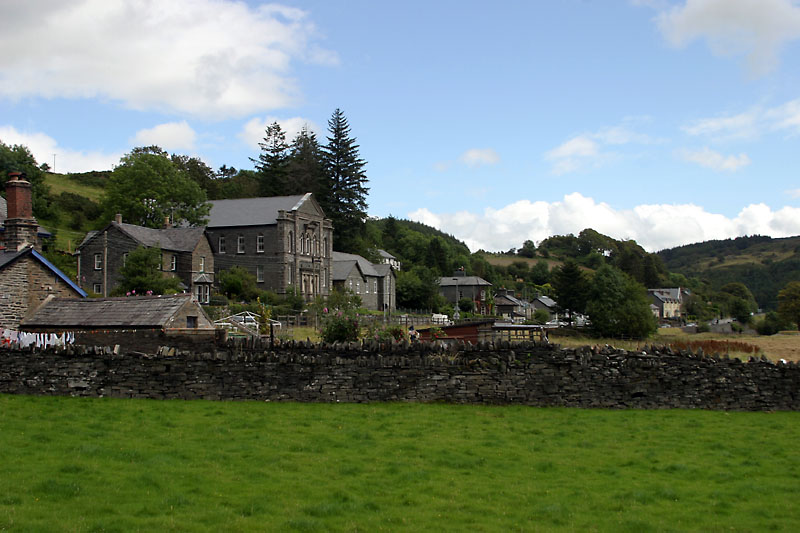