West Lulworth lies near the coast between the Isle of Purbeck and Weymouth. The small picturesque village with its 17th century thatched cottages is best known for Lulworth Cove, a natural shell-shaped harbour fronted by a pebble beach. In bygone years, its natural protection provided excellent shelter for smugglers and their goods but nowadays West Lulworth is essentially a gateway town to the Jurassic Coast.

Lulworth is included amongst England's UNESCO sites and its World Heritage Coast provides a glimpse across some 85 million years of geological evolution. Rock formations at Lulworth date from the Jurassic Period (150 million years ago) to the Cretaceous Period (65 million years ago). As such, the area is ideal for geologists, walkers and divers who will find a range of attractions here. Naturalists will also delight in the variety of flora and fauna including the Lulworth Skipper, Lulworth's unique butterfly.

At the east end of Lulworth Cove, steps will take you to the petrified remains at Fossil Forest and Mupe Bay for some panoramic views and photo opportunities from the cliff top. Part of the Lulworth Range Walks, the area forms part of The Royal Armour Corps firing ranges and is still used for training practice. The most popular attraction here are the nostalgic ruins of Tyneham Village which was sacrificed by its inhabitants to the great cause of WWII but never returned by the army. Further east, the historic Lulworth Castle is part of the Lulworth Estate and one of the most popular attractions in the area.

To the west of Lulworth Cove sightseers and geologists will also delight in the natural arches of Durdle Door and the Stair Hole. The Stair Hole is sculpted mainly from three rock types. As the continents collided, the sedimentary rocks underneath the water were tilted and began to be worn down by the force of the sea. The Portland Stone which originally faced by the sea was attacked by the waves and over the centuries small cracks gave way to the pressure forming caves. Continued pressure led to the formation of arches which in turn disintegrated into stacks. The strength of the sea led to the formation of a blow hole in the cliff to release air as waves smashed into the cave. Lying along the coast path just past the Stair Hole, is the spectacular arch of Durdle Door recently chosen as a dramatic setting for filming in Nanny McPherson.

Walking and Diving at Lulworth
Lulworth is home to one of the most popular walks in the Southwest of England. The busy Hambury Tout path between Lulworth Cove and Durdle Door sees some 200,000 walkers each year. The Lulworth Range Walks are open every Saturday and Sunday with the exclusion of six weeks of the year. They are also open during Christmas, Easter, the month of August and all public holidays. Walkers are cautioned against picking up stuff from the ground as they may be unexploded shells. Head to the Lulworth Heritage Centre, Durdle Door Holiday Park or the Lulworth Courtyard Park for your guides and maps which range from 30p to a pound.
Underwater wildlife guides and dive slates may be purchased from the Purbeck Marine Wildlife Reserve in Kimmeridge Bay. Divers can visit the underwater nature trail from Worbarrow Tout and the Wreck Barge. 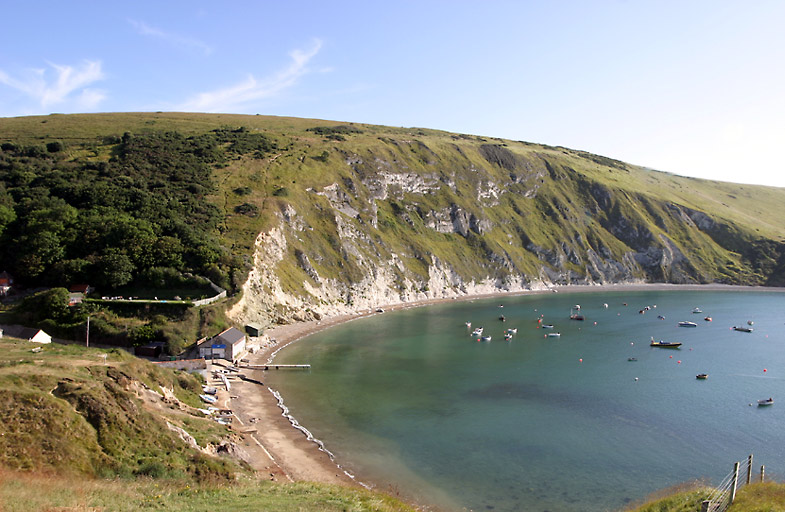