"Thus Sidmouth looked a hundred years ago, Still much the same, it lies these hills below..."
John Betjeman

Lying just 15 miles south east from Exeter, Sidmouth is a seaside village which has retained an elegant charm. It nestles in an Area of Outstanding Beauty on the Jurassic Coast looking over an esplanade and golden sandy beach to sea.

It is easy to see why John Betjeman described Sidmouth as 'A town caught still in a timeless charm'. Sidmouth boasts over 500 listed buildings, many of which are relics of Sidmouth's heyday in the Regency era. As you wander through Sidmouth, you'll see a variety of architecture ranging from fine houses built for members of London Society to small but well-preserved cottages which once housed the servants. Don't miss the cob-walled Old Ship Inn. A monastery in 1350, it has also served time as a handy smugglers' rendezvous. Another building of note is the Royal Glen Hotel (once known as Woolbrook Cottage). In the early 19th century when Sidmouth was popular with royalty, young Princess Victoria and the Duke and Duchess of Kent stayed here. However, their visit was cut tragically short when the Duke died a month later. Sidmouth's residents lined the streets in silent respect when the funeral cort?ge left the village. Years later, Queen Victoria's third son, the Duke of Connaught came to Sidmouth to visit the place where his grandfather passed on. He lent his name to Connaught Gardens which won a Green Flag award in 2002.

Lying in a beautiful valley enclosed by red sandstone cliffs, Sidmouth also boasts a couple of good beaches. The main beach, Clifton, is well-tended and kids will love looking for shrimp in the rock pools and building sand castles. Alternatively, a walkway from the seafront will take you to Jacob's Ladder, a shingle and sand beach where families relax at hired beach huts. If the beach isn't your thing, take a walk to Peak Hill and delight in a wonderful view of the coast and this historic town. Those interested in historic houses will enjoy a visit to Sand House, an Elizabethan relic with 500 years of family history, six acres of gardens and a medieval hall.

Attractions around Sidmouth
Sidmouth lies near the East Devon Way and directly on the South West Coast Path offering some great walking opportunities for outdoor enthusiasts. A popular attraction just six miles east of Sidmouth are the Beer Quarry Caves, a subterranean network of man-made caverns made by quarrying for Beer Stone. A different attraction but every bit as spectacular is A La Ronde. This unusual 16-sided house dating from the 18th century is packed with curiosities and also boasts a shell grotto. Worried about the kids? Crealy's Adventure Park (about 8 miles from Sidmouth) is a popular kids' attraction featuring flumes, ponies, an adventure zone and a magical kingdom. 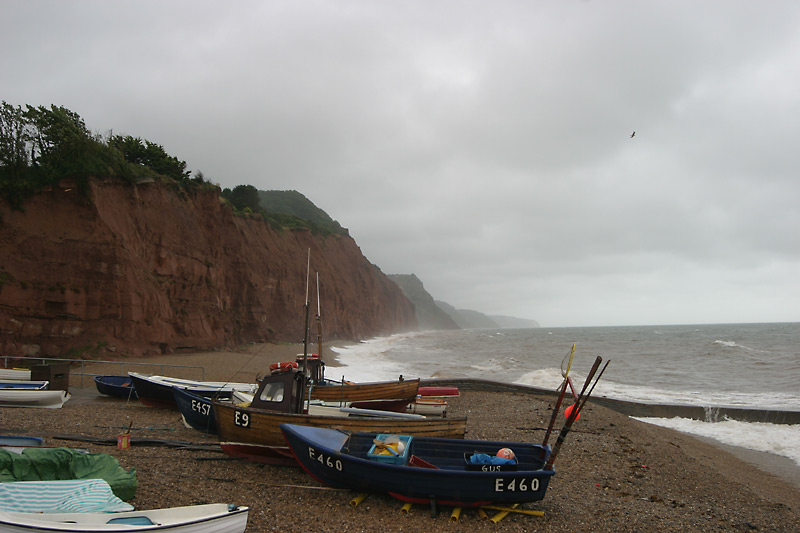