"Beddgelert! Gelert's bed and grave,
Replete with nature's charums;
Great guardian mountains stand around And hold it in their arms"
ANON 1851

To visit Beddgelert is to fall in love. Undoubtedly one of the most picturesque villages in Snowdonia, Beddgelert is a conservation village enclosed by scenic countryside. Dominated by the Snowdon Mountain Range to the north, Beddgelert is surrounded by the beauties of the Gwynnant and Colwyn Valleys and the Aberglaslyn Pass.

Strangely, Beddgelert owes its fame to the Napoleonic Wars which drove Victorian tourists to visit Wales and Scotland due to the risks of overseas travel. At the time, despite its scenic setting, Beddgelert was a mere row of slate buildings with little attraction for tourists. In an attempt to cash in on the new tourist trade, a Beddgelert local told a fantastic tale " the gimmick worked and Beddgelert earned its place on the tourist map.

As with all myths, the Beddgelert legend varies but all versions are poignant with the pathos of human folly. The legend is set in the 13th century when Llewelyn Prince of North Wales had a palace at Beddgelert and a superb hound and guard dog, Gelert. One day the prince returned home after a hunting trip to be greeted by a joyful but bloody Gelert. Seized by panic, Llewelyn searched in vain for his son of whom he found no trace but an overturned cot and bloodsmeared sheets on the floor. Overtaken by rage, Llewelyn drew his sword and plunged it deep into the heart of Gelert. As the dying dog gave a dying yelp, it was answered by the sound of child's wail. A further search revealed that the wee child was unharmed " the blood belonged to a large wolf which lay dead on the floor and Llewelyn's face was never seen to crease into a smile.

Beguiling as the tale may be, there is no fact behind the fiction. Beddgelert when translated into English does mean "Gelert's Grave". However, the Gelert to whom Beddgelert owes its name was a saint who settled in the hamlet now known as Beddgelert in the 8th century. It was this tale that drew the likes of Wordsworth and Borrow to the area and Beddgelert has never looked back. Indeed, the official tourist brochures continue to relate the tale without the slightest mention of the lack of historical evidence to support it! 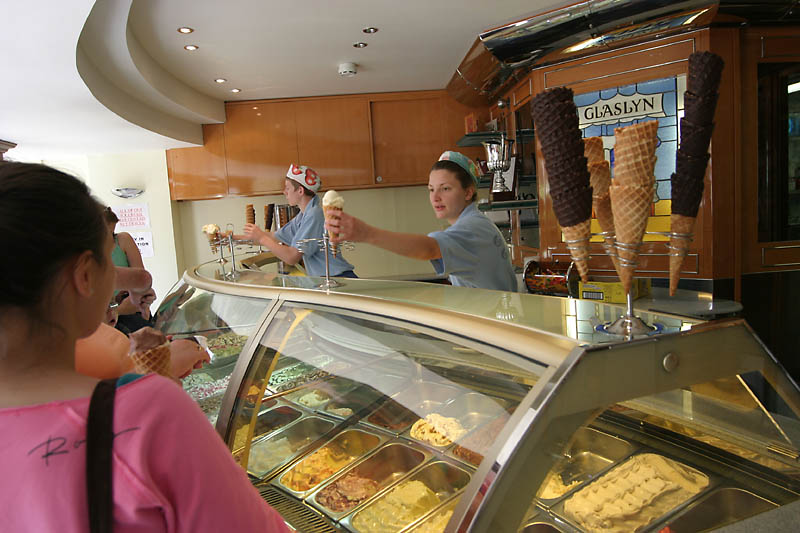 A somewhat sleepy litte town, Newtown is the former capital of the Welsh textile industry. The town is now best known for Robert Owen, a great social ....